This article refers to the address: http://

In the CCD application, the following measures have been taken to suppress and eliminate the above noise [3]:

(3) For shot noise, an adjacent pixel (or adjacent line) integral averaging method is used to remove or adjacent multi-frame averaging. (4) Dark current noise: For a CCD with a darker average current of each pixel, if there are a small number of dark pixels at the beginning of the pixel array, the output signal is sampled and stored, and with the subsequent valid pixels. The output signal samples are subtracted to remove dark current noise. However, it must be ensured that the integration time and temperature of the two samples are the same.

(5) A low-pass filter with a cutoff frequency of 2f (f is the CCD readout frequency) can be used for the output noise. There are also related double sampling method (CDS), double oblique integration method (DSI), clamp removal method (CCS) and so on.

The image signal received by the CCD image sensor is preamplified and becomes a differential signal output. After the differential receiving circuit, it is converted into a single-ended video signal, and subjected to correlated double sampling processing by CDS to obtain a "clean" video signal, and then subjected to low-pass filtering. The filter filters out the spike interference of the CCD driving pulse, and is amplified by the controllable gain amplifying circuit to the level required by the A/D converter, and is subjected to A/D conversion to become a digital image signal, which is alternately buffered by a buffer (FIFO). The LVDS interface chip is driven and output.

2.2 preamplifier circuit
The signal level of the CCD output decreases as the accumulated charge increases. Amplification and differential output are required for long-distance transmission and reduced common mode interference introduced during transmission. The preamplification is to amplify the output signal of the CCD to a sufficient amplitude.

In this system, the AC coupling is adopted between the preamplifier and the CCD output terminal, which eliminates the DC level, which is beneficial to the matching between the two stages, and also eliminates the influence of the zero drift caused by temperature and other factors on the transmission signal. Of course, the use of AC coupling causes loss of DC components in the signal, which can be recovered by subsequent clamp circuits.

To ensure that a high signal-to-noise ratio video signal is output, the noise must be processed. The correlated double sampling (CDS) technology not only can filter the reset noise well, but also has certain filtering for the horizontal clock drive of the TDICCD sensor and the ground-line coupled crosstalk noise of the power supply, the white noise of the output amplifier, and the 1/f noise. In addition to the role [4].

In this system, we use CCD camera interface chip TDA8783 to realize CCD video signal processing. It contains a correlated double sampling (CDS) module, which can effectively process the CCD output signal and eliminate the KTC noise of CCD. The CDS programmable bandwidth is 4 to 120 MHz; the input peak voltage is 400 mV; and the output amplifier gain is 6 dB. In use, the internal control DAC can be selected by programming the external three-wire serial port to implement the CDS function. When the serial port shift register address A2A1A0 = "001", the on-chip 4bit DAC works to control the CDS operation. The sampling rate in this system is 4MHz, and the 4-bit DAC input code is set to D3D2D1D0=â€œ0001â€.

2.4 Gain Control In order to adapt to different brightness targets and prevent signals from being too weak or saturated, a gain selection amplifier circuit should be designed in the video signal processing circuit. According to the brightness of the ground target, select the corresponding gain. The CCD camera interface chip TDA8783 integrates a gain controller (AGC) with a minimum gain of 4.5dB and a maximum gain of 34.5dB. The internal logic of the gain control of the TDA8783 is shown in Figure 2-2. The gain control function is realized by programming the three-wire serial port. When the serial port input shift register address A2A1A0=â€œ010â€, the 9 bit control DAC works; when the input code is â€œ00â€, the minimum gain is 4.5dB, and the input code is greater than When it is equal to "319", the output gain is 34.5dB. 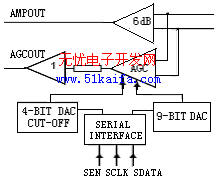 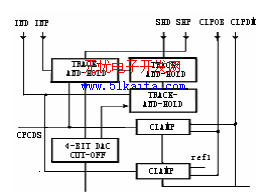 The signals output by the correlated double-sampling processing circuit are mixed with sampling spikes and other high-frequency interference signals. This requires low-pass filtering circuits to filter out high-frequency interference and select useful video signals with lower frequencies. At the same time, the preamplifier adopts AC coupling, and the negative AC signal is correlated with double sampling to remove noise, and appears in the positive polarity form at the output of the correlated double sampling circuit. Unnecessary negative polarity components are introduced during the two sampling and subtraction processes. Since the A/D conversion circuit requires that the input analog quantity cannot be negative, a clamp circuit is provided to remove the negative level in the low pass filtered signal.

The TDA8783 includes a bandwidth control circuit and a clamp control circuit that enables bandwidth control and clamp control by programming the on-chip three-wire serial port. The internal logic of the TDA8783's clamp control is shown in Figure 2-3. When the serial port input shift register address A2A1A0=â€œ001â€, the on-chip 8 bit DAC works to control the bandwidth. At this time, D3~D0 are used to set the CDS bandwidth, D4~D7 are used to set the AGC bandwidth; when the serial port inputs the shift register address When A2A1A0 = "100", the on-chip 10-bit DAC operates to control the input clamp level of the ADC (analog-to-digital converter).

2.6 The output of the analog-to-digital conversion video processing circuit is an analog signal. In order to facilitate data compression and transmission, it needs to be converted into a digital signal. The analog-to-digital conversion circuit [2] converts the analog video signal into a digital video signal under the control of the timing pulse. And drive the output in the specified format. According to the technical requirements, the radiation quantization level is 8bit, and it is necessary to use the A/D chip output with a sampling rate greater than 10MHz. In order to obtain a high quality quantized signal, it is necessary to carefully select an A/D converter with a high performance parameter.

In this system, the TDA8783 integrates a 10bit A/D converter. The maximum sampling frequency of the ADC (analog-to-digital converter) can reach 40MHz, the minimum clock pulse width is 12ns, the duty ratio is 1:1, the input peak voltage is 2V, the maximum input current is 120, and the +5V single-supply power supply, the typical nonlinear error is 0.2LSB. The maximum sampling delay is 5 ns.

3 Conclusions (1) Only the correct design of the system's timing drive signal can complete the coordination of the entire circuit;

(2) The preamplifier circuit of the CCD output video signal should also be as close as possible to the sensor, CCD video signal processing circuit

Should also be as close as possible to reduce the noise interference introduced during transmission;

(3) After the CCD signal is processed by the video processing circuit, the signal quality is greatly improved to meet the requirements of the system index.